skip to main | skip to sidebar

Yesterday Virginia Commonwealth University hosted an artist lecture by Hank Willis Thomas. Interestingly, Thomas presented his work in a different manner than other visiting artists. At the beginning, he spent a good amount of time showing us his first pieces of work. While I was unimpressed and slightly turned off by his frame photographs, I soon realized the purpose. Thomas was completely exposing himself, allowing us to literally follow his development. Once I understood this, I began to relate to him and enjoy his creative process. Boy, did his concepts really develop!

Thomas considers himself a "visual cultural archaeologist," which follows his process of harvesting and collecting imagery to appropriate. Thomas views logos as,"our nation's hieroglyphs." Explaining that he was intrigued as to how generations to come would analyze our current culture. Thomas showed us examples of work from his series B(r)anded, which focuses on the use of African American male body in advertisements. I was fascinated by the connections he had made.Using the popular symbols of Nike and Cotton, he appropriated the symbols into works that connected modern day industries with slaves. By manipulating the language and visuals of advertising, Thomas is achieving accessibility to his viewers.

Thomas also showed a film called, "Winter in America." The animation film outlines the story of his cousin's murder. Using G.I. Joe figurines, Thomas collaborated with Kambui Olujimi to create a short film which sports the underlying message of how violence is systematically portrayed in America. After showing the film, he shared still frame photographs that had been made into a book. I think this piece alone truly showcased his technical abilities as a photographer. The images were beautifully composed and included perfectly captured lens flare. While the subject was depressing, I found this to be his most attractive piece.

While he showed many other works, some of them being collaborative films and re-contextualized imagery. I was most influenced by Thomas' ideas. He seemed to have an eye for analyzing culture and society. Many of the things he said sent my mind reeling as I was pushed to reconsider commodities and elements of design. One of the things that I was most astonished by to what extent Thomas appropriated. This clearly shocked the audience of students, as we have attended classes that have preached copyright and extreme avoidance. Thomas showed us the image, "Priceless" he created using advertising language. Using an image from his cousin's funeral, he added text which mimics that of an Mastercard advisement, "9mm Pistol: $79, 3-piece suit: $250, gold chain $400, new socks: $2 Bullet: 60 cents, Picking out the perfect casket for your son: priceless." In the left hand corner, the logo for Mastercard. This photograph was displayed on the exterior of the Birmingham Museum of Art in Alabama for 6 months. It created such a stir in the town that Fox 5 News had a story about the piece. When a student questioned the issue of showcasing work involving a corporate logo, Thomas joked that, "There's no such thing as bad press. When would the credit card company ever have the opportunity to be on the wall of a museum." I think that by seeing this lecture, Thomas will has opened up a window of possibilities for the student artist at VCU. I doubt that they will cower in fear of appropriation and the copyright issues. Overall, I think he was a very influential speaker for our school. 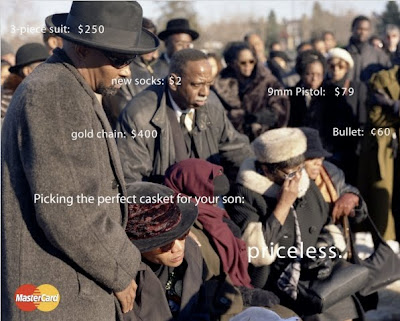 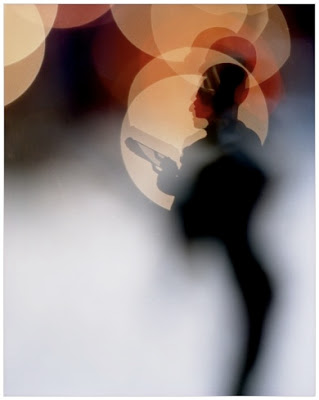 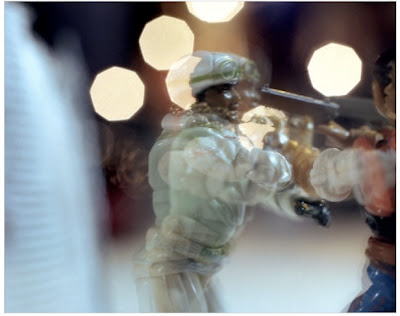